The sun/moon won’t move north to south, it’ll appear in the east (right of the screen) and set in the west (left of the screen). It can show a time for the solar noon. You can also show shadow lines like in photography apps.

@Ohan, can you code in Python? or anything else?

Maths is one part of the solution, the other is programming, the last part is getting it into the app.

I mentioned in another post that I’m reluctant to make predictions as part of Flowx. It’s a difficult aspect of meteorology, one I’m careful not to get into. Instead we need a way to get third party predictions into Flowx. In other words, if you can do the Math and we can create a script to generate predictions on the server, then Flowx can pull them in as “Ohan’s Awesome Sunset Predictions” data source

This is quite a cool approach since it keeps Flowx separate from the prediction source, i.e., just the messenger.

I have mostly written scripts in bash (and in Matlab/octave) on Linux systems and been piping in results from other Linux/Unix programs.
I’m fairly fluent in regex and sed.

Python is perhaps the next language I should learn, but I have not gotten properly started with it, so I’ve kept my personal programming projects in bash.

Shux, Bourne again shell, wow!! And Octave. Those bring back memories. Did my Masters using Octave. I used to be the Science Grimoire maintainer for Sourcemage, a Linux distribution based on Bash.

All my systems are Linux.

Python is pretty much like Octave, just different syntax.

Eureka!
Obviously, the Flowx weather map shows conditions hour by hour.
Overlays on this map allow a selection of graphical info presented.
Sunrise/sunset are hourly values (repeat for the Moon, maybe).
Eureka!
Imagine if; the weather map transitions to a dimmed state, for evening, and undimmed for daytime. Expand on the idea, to possibly reflect the actual location of the sun (and/or moon) by having less dimmed areas/corners in/at the location of the (moon?..) So that means “more undimmed” areas/corners in/at the location of the sun. All graphical data (KISS) with maybe, addable text vales for sunrise/sunset (if the center text area becomes configurable).

Why I like it: I simply get lost scrolling time in Flowx. Thumbs aren’t precise, and the indicators for time are the text time value, and the bar under my thumb; these are all that indicate if I’m scrolling time in the same day or not… leaving me, processing both text data and visible data, at the same time. A dimming weather map can simplify this, to a simple mental count: 1 day, 2 days, 3 days, … And “to” mention… It makes night weather different from daytime weather, at a glance. We all likely care about one more than the other, so why not “soft” filter it via an map overlay!?
This could be epic, even in it’s simplest implementation.

Interesting. There is so much you can do. I do plan to have a dimming overlay for dark areas, but I hadn’t thought about the moon. You could add lightness based on the moon phase.

The background colour of the days is supposed to indicate the day. I was thinking of adding another row of 24 hours to highlight the hour of the day.

BTW, I assume you know about the swiping up/down for slower change in days. One map width up/down = 1 day change. 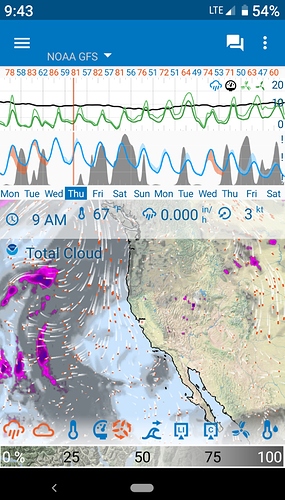 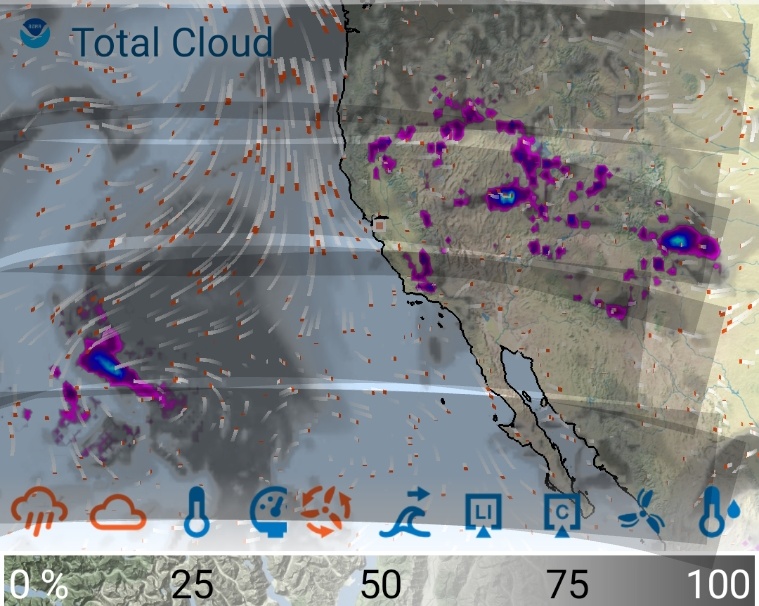 I’m not clear on “dimming overlay for dark areas” and don’t likely need to be (As you are obviously Greek… Or are speaking it). But I thought I would revert to modern day cave drawings to conclude my thoughts, which go with these points (and grunts).

And for sun movement. 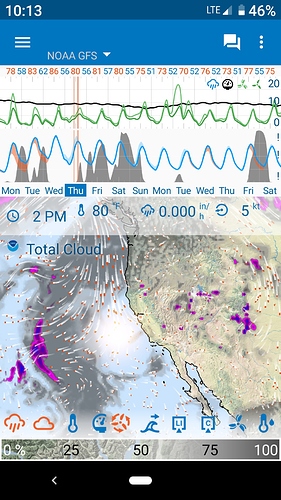 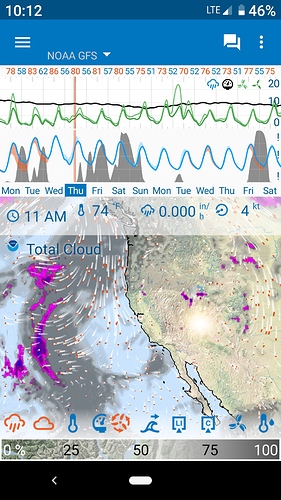 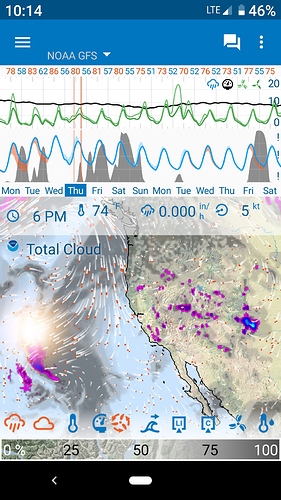 I do plan to have a dimming overlay for dark areas, but I hadn’t thought about the moon. You could add lightness based on the moon phase.

Wow. “Lightness based on the moon phase” Wow. Come on!! I mean, WOW!

I’ve started a little to look into the possibility of using the power of www.suncalc.org (or suncalc.net).
I’ve contacted suncalc.org regarding output as json, since I did not find it on the page as if now.

In another project of mine I’ve used api.sunrise-sunset.org since it does output a json, than can easily be parsed for further use. However sunrise-sunset.org does not output the sun’s altitude and azimuth, but I have reached out to them asking if they could add it.

I’ve looked at suncalc before. The plan is to port the library to Java or Kotlin since it’s an analytic calculation as opposed to a simulation. This mean we don’t have to download data, it’ll be calculated on the phone. It’ll also include altitude and azimuth.

I was thinking about what you are wanting and there is UV data and other radiation data which is effectively how much sunshine reaches the ground. This is what they use to calculate evaporation rates.

I am reluctant to add new data and features without knowing how much people will want it and use it. When I started Flowx (WeatherBomb), I added most features users wanted and ended up in a right mess. I had more code to maintain and more data to store.

I used to have UV data but hardly anyone used it. So I removed it and no one complained.

I use this app (UV Mate), which is a pretty simple yet impressive app, as they adjust the ongoing radiation according to cloud cover (though the forecast doesn’t take that into account). It’d be great if Flowx could show that curve too (in the monkey’s wedding chart, along with the lunar/solar tide cycle).

Did you mean https://uvimate.com/, and do you have the paid version of it, or could you send a link to that app?

Thanks for the link @andrelevy!

Unfortunately the app is not available in my country, and thats why I couldn’t find it via search.

It seams to be olny for Australia.

There is UV radiation data available from the met orgs but I don’t know how it related to the UV level or index. The value are in W/m^2 (I think).

I know the smart guys who make UV Lens - you could try this out as a comparison. Let me know what you think.

Happy new year, and congratulations on the progress with your house!

As and attempt to reboot/revive this thread, I wounder how things are going with these plans:

A) Add the (sun day/) night shadow as animation to the map.

B) Same for the moon.

Add lines showing the direction to the sun and moon on the map.

if the lines pointing in the direction of the sun and moon are always made to be 1,000 km, with a mark at 450 km and on 160 km on the map, this would give a good first approximation to answer if the forecasted clouds would block the sun/moon or not.

the maximum possible distance to the top of the cloud

for Noctilucent clouds, Cumulonimbus cloud, and “typical, run-of-the-mill, (non-storm Cumulus) cloud” respectively, given their normal heights and the curvature of the earth.

Hope you’re doing well, and that these features can climb in preority.

It might be a quiet next half a year feature-wise. I’ve decided to start the Apple version myself and have a good crack at it. This means there will be less of my time for Android. I will add features and new data to Android but they will slow coming.

Why? Androids revenue didn’t grow as expected last year. I was expecting for revenue to cover 100%+ of costs which would allow me to hire help to go to Apple. It didn’t happen. We’re at 70% covering costs. It was quite depressing knowing it’ll be another year of scraping by. So I decided that I would do Apple since there is a high chance it’ll 2-4x the revenue. This is a hard choice to make since it’s risky and may take a long time to get something out.

Adding small features like sunrise/set will not grow revenue significantly, if at all. In fact, prompting users to buy, new articles, blogs, top-ten articles grow Flowx a lot more.

This is the reality I’ve learnt over the 8 years of developing apps.

Sad to hear that growth was less than expected, but on the upside once the apple version comes out I will be able promote this awesome app to more of my friends!

The other upside is that if we get 2-4x increase in revenue, we can hire help and development for both Android and Apple will be much faster and we’ll be in a far better place in the long term.

In other words, we’re playing the long game.

Hopefully, it’ll be 6-12 months of hard slog and we’ll be in a better place.