At the end of 2021 I was busy building a studio but the new year marked the transition from building houses to building the Apple version of Flowx and the progress has been great. Here are screenshots of the Android and Apple versions: 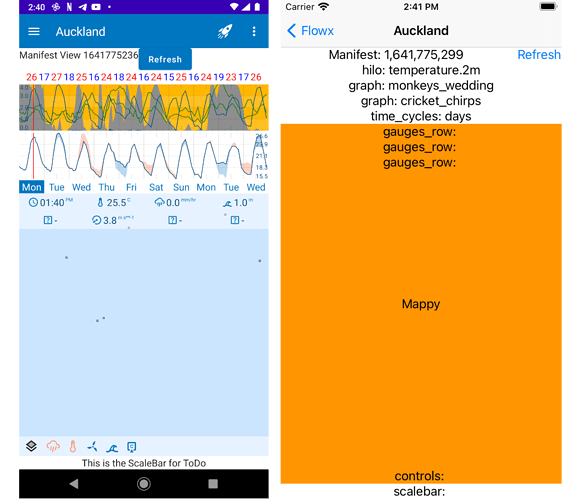 This might not look like much but it’s very significant. I’ve been rewriting the backend code for Flowx. The Android app you see above is using this backend code and today I connected the Apple app to the backend code. In other words, both the Android and Apple app share over 90% of the code so whatever I code up for Android, Apple will automatically get which makes development and bug fixing easier. The other 10% of unshared code is essentially the UI which is different between Android and iOS, as you can see.

What does this mean? - we have made a big break through.

What next? Over the next few weeks I’ll be coding the iOS app to look like the Android app, i.e., the graphs, gauges, etc… Then I’ll move on to the map which is the remaining complicated part - but I’m optimistic it should be relatively smooth.

To be honest, this the most excited I’ve been about Flowx all year

This is amazing news!

I keep checking the Flowx forum obsessively for any iOS updates since moving from Android in September and expect others are doing the same.

Your post is therefore super encouraging to read and has made my day, cheers for sharing and keep up the good work.

Before I work on the above, I’ll return to old Android Flowx to do some updates. It has been 2 months. I plan to get old Flowx ready for this new code and will slowly bring across some code for testing.

I have been a user for years and stayed with Android solely because of FLOWX. My kids[grandkids] have taken me to iphone so Grandparent Facetime is readily done.THANK YOU FOR THE MOST POWERFUL USER-INTERFACE WEATHER APPLICATION ON THE PLANET. When this goes into the Apple store, you will be welcomed, I am sure. ANY UPDATES? I will support on request.

The rewrite of Flowx and the associated port to Apple is going well but slow. The screenshots below don’t look like much progress but the progress is in the background code. The Android and iOS apps are sharing even more code now. Essentially only the UI (and graph rendering when it’s done) has to be written for each OS. 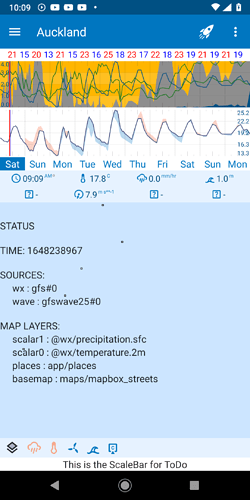 Thank you very much for the update

Awesome work! Is there any scheduled release on the app store? Can’t wait to try it out.

There is no ETA for the App Store, in fact I know nothing about how to put it on there.

Just watch these updates and also the Android app. Because the new code is shared between Android and iOS, I plan to release the new code to Android first so I can find bugs, once the code is stable, I’ll release to Apple.

Apart from the rewrite, I have one iOS hurdle left which is the code for the map.

Man, you could’ve hired a couple of devs and have the money flowing into your pockets years ago. iOS crowd is really a good paying one. Could not compare to Android at all. It seems that you are falling to the same old fallacy “no one can do the job better than myself”. Tough to watch. People are struggling, wanting your app, others paying crazy amounts for marketing campaigns to be able to get this level of recognition.

I have my many answers to these questions but I doubt they will match yours.

Don’t know what’s brutal about my statements, but NVM.

As far as I remember you’ve announced iOS version back in 2019 with email subscription for updates. Ask yourself a question: is time-to-market of 3+ years is fine? You’re just losing money/subscribers base.

We agree on “quality of life” but I think we have different perspectives of what that means.

I used to work a job in New Zealand that paid very well. Well enough to travel and do those other things. But I was working long hours. I worked in a start-up doing massive weeks and in the end it collapsed due to decisions outside my control. It was hard to see all my hard work wasted due to others decisions. So I decided to work 8-hour days and spend my spare time on my own ventures. WeatherBomb/Flowx was born as a side project in this time.

We moved to the Cook Islands for a number of reasons, including quality of life, and started developing Flowx as a business. I did contract work and borrowed quite a bit of money to get established. Last year Flowx started covering our living costs. Now it’s about paying off loans.

I was against investment because you loose control and it could get to the stage when someone if making decisions about what I should be doing. For example, put ads in the free version or add tracking libraries or sell data to third-parties. I’ve dealt with investors with the startup mentioned above - they care more about their investment than people.

But I did get a grant to port Flowx to Apple. I spent thousands on hiring a remote developer. Although the developer was good, he ported old Flowx to Apple along with my mistakes and bad designs. I liken it to literally translating a novel from English to French - there was no improvements. The issue is I would have two bad code bases to maintain. It’s not the developers fault - Flowx code has evolved over time and is complex. Now I understand more, I’m rewriting Flowx to have a shared code base (one thing to maintain) but also cope with future ideas. During the rewrite, I’m continuously iterating on the code design. Hiring a developer is not as simple or cheap as you make it sound.

I believe if you build a good product, the money will follow. Money is important but it doesn’t become my driver. I like building things. I also get satisfaction from seeing people get value from Flowx, this is why there is a free version and I’m porting to Apple.

I don’t believe you have to follow standard models, e.g., 9-5 jobs, rat races, investment, fast growth. Speaking of “fast” - what about that Fast company that got $102M in investment and blew it in just over a year with only $6k revenue to show for it.

I don’t believe Flowx has to go to Apple. For example, Apple bought Dark Sky and dropped Android. Android is a big enough market. Instead of spending time porting to app, I could spend time on more features for Android, for example.

“Time-to-market of 3+ years is fine?” - I’m fine with this. I have to be, I made the decisions to be where I am today. BTW, my initial plan in 2012 was to finish WeatherBomb in 6 months and then port to Apple - so it’s 9+ years and counting time-to-market.

The cool thing with this rewrite is that I should be able to port to desktop (Linux) first and possibly the web with relative ease. This is exciting for me.

Here are two of my favourite parables:
The Parable of the Mexican Fisherman
Allan Watts - Life and Music

As I said we have different perspectives on what is important in life. Life doesn’t have to be what other people think. You can decide what it should be.

Man, you could’ve hired a couple of devs and have the money flowing into your pockets years ago.

I couldn’t have gone into more debt.

iOS crowd is really a good paying one. Could not compare to Android at all.

Android is a bigger market with less paying. iOS if a smaller market with more paying. What I’ve read is that they generate about the same amount. More importantly, I expect going to Apple will quadruple the growth.

It seems that you are falling to the same old fallacy “no one can do the job better than myself”.

Tough to watch. People are struggling, wanting your app

You aren’t struggling. In 2017, Flowx was earning less than it costs to buy internet alone. It didn’t earn enough to pay for rent, food, power, beer… - even then I didn’t think we were struggling.

That said, I was a paying user of Weatherbomb/FlowX for several years before switching to iOs in 2021.

I was enjoying your app. How many people have registered in anticipation of your iOs app?

Just over a 1000 have registered on the new website. The old website got many registrations too but it got polluted by spam registrations.