The widget - is it necessary as-is?

I’ve been using Flowx for more than a year and I love it. The most unique and best feature is the ability to assess the weather at a quick glance.

Recently it occurred to me that the only reason I use the widget is to open the app. The info in the widget isn’t very valuable without the map, so I click on the widget and the app opens in a flash. The icon does the same thing, and just as fast.

Does anyone find the widget useful by itself? Just curious.

When Dark Sky went over to the dark side I switched to Flowx, and the only thing I really missed was the widget that showed imminent precipitation. I’ve since found the same widget in an app called Shadow Weather, but I’m wondering if that’s something Flowx could incorporate in its widget.

Not a big deal. Just a suggestion.

Does anyone find the widget useful by itself?

Mostly for quickly checking for sunshine/clouds/rain and/or major changes in temperature.

I find this useful both when I do and when I don’t open the app.

Glancing at the graphs during the split second before opening the full app, speeds upp the intake of all the information once in the app.

I beg to differ.

Does anyone find the widget useful by itself?

I do. It gives me the forecast for the week, and I have it at the very top of my very first launcher page.

I have multiple versions of the widget on the same screen. Showing snapshots of relevant models and associated data.
As model accuracy is not fixed.

That’s an interesting idea! Otherwise it’s just the same data without the map.

Otherwise it’s just the same data without the map.

I, for one, barely use the map. It’s fun to look at—and flowx definitely has the most detailed and animated map I’ve seen in weather apps—but I rarely ever read it (one notable exception is with heavy rains).

I used to use widgets a lot in Auckland where the weather is quite different there. Then I would look at the map for more details about why the weather was happening.

In the Cook Islands, I don’t use a widget. I look at the map since we have a convergence zone that moves north/south and when it crosses us, it rains and changes from cold to hot or vice versa. There are also tropical storms that fly around. I find the map very good for understanding these weather phenomena.

I guess it depends on individual circumstances.

I don’t have room for the widget on my home screen so it takes me one swipe to get to the widget. It’s just one click to open the app so that’s what I’ve been doing lately. The app loads very fast on both on data and WiFi which might not be the case for everyone.

But I love Alex’ idea of using multiple widgets to compare data sources. We’re having some shifty weather here in the northeast US so I’ve been making that comparison. So far NOAA HRRR is the winner! 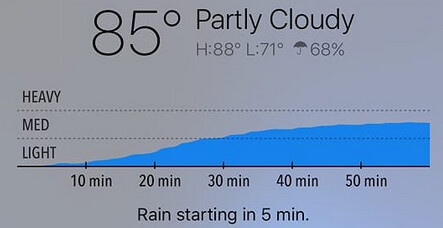 That was really the only thing I missed about Dark Sky.

The app loads very fast on both on data and WiFi

DarkSky uses Machine learning to predict precipitation for the next hour from Radar.

Just remember 1 source is not better than another You need all of them to get a more accurate picture. topography affects windy and moisture , trees, house etc. will effect wind. also what you see on the radar may not even reach the ground or the opposite more will fall than predicted aka flash flood. hope any of the info here and other posts help.