What are the differences between the various radar views(Answered)

I really like the radar views, but am having difficulty understanding the differences. They are all slightly different and I am not sure why.

There seem to be four views:

All of these seem to run both into the future and into the past. I had thought Radar Reflectivity would have been “actuals”, past only, based on what the radars actually detect. But it runs into the future, so what exactly is it? I also notice that my radar programs (I like MyRadar), which shows only the past / current view is different than Radar Reflectivity.

Now on to 1k and 4k radar. I had thought these were forecasts. But they seem to also run into the past. Is this actual? Or is it the forecast from the point in the furthest point in the past I can access? For example, right now it is Wednesday at 1700. I can run these backwards to about 0100 (last night). But doesn’t HRRR update every hour? In which case my interpretation doesn’t make any sense. I am clearly confused.

Finally, given all this confusion, what exactly is the Composite? I had figured it was real time / historical radar with a forecast, but that interpretation doesn’t really seem to make sense. The forecasts on the composite don’t seem to match any of the others. (Nor does the history).

I really like the interface and ability to see these different elements, but don’t know what the various radars are telling me.

There are three issues here: What is RainViewer data What is HRRR Composite radar Understanding the weather RainViewer is real MEASURED data so it’s only history up to about 10 minutes prior to now. Radar are slices through the atmosphere. HRRR Radar is PREDICTED forward from measured radar. The 1km and 4km radar is similar to a measured radar slice. Composite is merged many slices together. Don’t quote me on this. This is my understanding and can be wrong. Understanding weather - Sh…

Alex–Thanks for the link. That helps some. But it leaves some questions unanswered.

First, if RainViewer data is MEASURED, why does it show anything for the future? My original assumptions was that it was measured, but when I saw that it went into the future, I realized I had a basic misunderstanding or mistake somewhere.

Finally, what is really in the Radar Composite? It says NAM and HRRR, so that seems to be forecasts. But it also has the past. I figured it was a combination of MEASURED for the past and FORECAST for the future. If so, which forecast exactly? But maybe that is wrong.

I am very confused and would appreciate any help or insight.

@virtualdavid basically its the distance from the radar that the measurements are collected as a radar signal is < shaped so it reads multiple layers any “future” radar images are predictions all radar images are in the past and the reason RainViewer doesn’t show future its a different app so on Flowx it just has past imagery The reason for this is to track trends so you can compare what the radar showed to what you actually got. keep in mind radar can’t tell you how much rain/snow will reach the ground it just gives you an idea of hey it might rain/snow and how much moisture you could get

First, if RainViewer data is MEASURED, why does it show anything for the future? My original assumptions was that it was measured, but when I saw that it went into the future, I realized I had a basic misunderstanding or mistake somewhere.

RainViewer radar is measured radar. A radar send out radio waves and measure how much of that wave is reflected. The reflected radar tells you about what precipitation is out. There will be a beam vertical angle so it shows what is seen in that beam. Since you can’t measure the future, anything you see beyond this is predicted.

*** I’m not a meteorologist and this this what I learn when processing the data and reading around.

RainViewer data is MEASURED, why does it show anything for the future?

HI!
Some clarification regarding RainViewer:

In the sepperate app, called RainViewer (RainViewer.Com), by Oleksii, you can see “Future radar animation”, (mayby you’ll need premium RainViewer for that).

(I’m hoping that some day it will be possible to get the RainViewer radar forecast data into Flowx, at least for us who have both Flowx gold, and premium RainViewer.

This is interesting for me since the RainViewer data is available where I live, but the other radar sources that Flowx uses, don’t provide data for my area.)

So I’m guessing, that when you think you have seen RainViewer data in the future in Flowx, it is a misconception from any of the other radar sources being active at the same time.

To ensure no confusion only leave the Radar Reflectivity icon in the map toolbar highlighted.

As for the predicted radar data that is avaliable in flowx:
Look for “predicted radar” on https://www.flowx.io/help/datasources/
And you’ll find it in 3 places:

Have “radar reflectivity”, but not “predicted radar”.

Here is a picture of the forecast rain storm for a few days from now. I’ve selected “Radar Reflectivity”, and turned off the other radar forms (on the lower right on my screen they are composite, reflectivity, 1k and 4k – only the second is on / orange)

If “Radar Reflectivity” is measured, how is it making a forecast?

Thanks for clarifying, that is cool.

Since 1k and 4k are elevations of the measurement, that would mean that if I see action at 4k but not at 1k there would be virga (rain falling but not reaching the ground). Or maybe wet mountain tops but not valleys. This way of interpreting explains a why the two are different and how to understand the differences.

Do you happen to know if there is a “ground” level radar, that is a version that says whether it is raining at ground level whatever the elevation? I live in a hilly area, so elevation matters.

@virtualdavid no ground radar unless you have one installed near you that’s why there is CoCoRaHs and Skywarn groups to report what is hitting the ground.

Duane–
Here is a great easy-to-access article on what Composite (vs. Base) radar is: 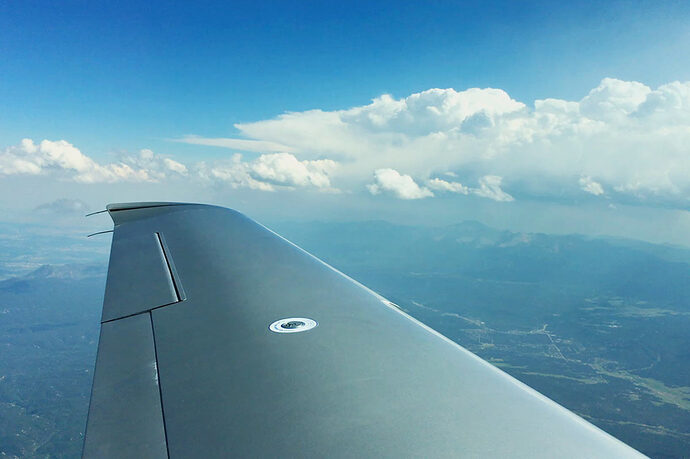 What's The Difference Between Composite And Base Radar, And Which One Should...

When you look at both, they sometimes look the same, and other times they look very different.

I’ve noticed that “Radar Reflectivity” in the future is exactly the same as “Composite Radar”. So maybe these fields are the same?

Reflective Radar is exactly as it sound “Reflectivity is the amount of transmitted power returned to the radar receiver after hitting precipitation, compared to a reference power density at a distance of 1 meter from the radar antenna”.

@BrianLY-38 Thanks for the definition.

I am beginning to think these two data sets are actually the same. Rainview uses for composite radar forecast for the future; “Composite Radar” uses Rainview for its history. But I am not sure.

@virtualdavid I’m not a meteorologist lol I use both apps to compare data. the difference between the two is Composite takes the highest echo return from each layer so it shows what might be in the clouds which may or may not fall. Reflective Radar shows what may or may not be falling depending on your area(lowest level of radar signal) . 2 Differently Radar Views of the Same Area. the History part (Rainviewer ) so you can see what past you so you can track trends and compare what if any precipitation you got compared to what the radar showed. keep in mind the Radar can’t show what may fall it could be reading dust, smoke, etc. but it does give you a heads up. both Reflectivity and Composite can display Both History and Predicted Future

Great, that’s exactly what we need here on the forum. It’s great when users find details to weather data. It’s difficult for me to track all this down.

I’ve selected “Radar Reflectivity”, and turned off the other radar forms (on the lower right on my screen they are composite, reflectivity, 1k and 4k – only the second is on / orange)

It seams as you still have the precipitation on, the orange cloud to the far left.

When I turn on only “Radar Reflectivity”(i.e. the measured radar collected and provided via RainViewer), and have all other data sources turned off, then I see no data on the map for future times, eaven when zoomed out to view the whole world.

It seams as you still have the precipitation on, the orange cloud to the far left.

@Ohan / @Alex You solved the mystery! The problem was the precipitation! When I turned it off, things cleared up. Radar Reflectivity is indeed history only.

I got confused because the display for precipitation and radar are similar. I changed the color scale on precipitation to avoid future confusion.

Composite, 1k and 4k are forecasts. So now I think the history for these is the forecast from a moment prior to the time one is looking at. (So comparing say Composite and Reflectivity at a point in the past would tell you how well the Composite forecast was).

Thanks for helping to clear it all up!