When using any DWD model the wind indicator shows the wrong direction, it shows the opposite direction as it should (180° error)

Its ok with Meteo France and GFS

As i wrote, it seems to occur only when using DWD model

@tiwag. I couldn’t make the gif slower but gives you an idea even the mph and temp is different. I think it has to do with the km the info is being read

that’s why the weather forecasters always say temp, wind, Humidity etc is between “X and X” and don’t forget some models show from readings like E to W while others would read the same info as W to E the whole from to and to from

Differences in predictions of different models has nothing to do with this bug.

Check the wind streams in my screenshots.
Every model , also DWD, predicts NNE as it is typical for the Agean sea.
Only the wind indicator shows SSW when using DWD model. Typical 180° error of the flowx app.

I could be wrong 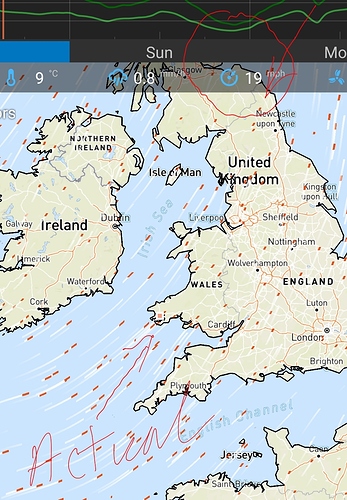 isn’t the meter dial icon thingy supposed to point the way the wind is blowing to? @duane will straighten use out

isn’t the meter dial icon thingy supposed to point the way the wind is blowing to?

@tiwag figured it out turn your device upside down

isn’t the meter dial icon thingy supposed to point the way the wind is blowing to?

Acording to what I found after some searching and reading:

"Remember that wind barbs point in the direction the wind is coming from.

Wind arrows (vectors) point in the direction the wind is blowing towards." 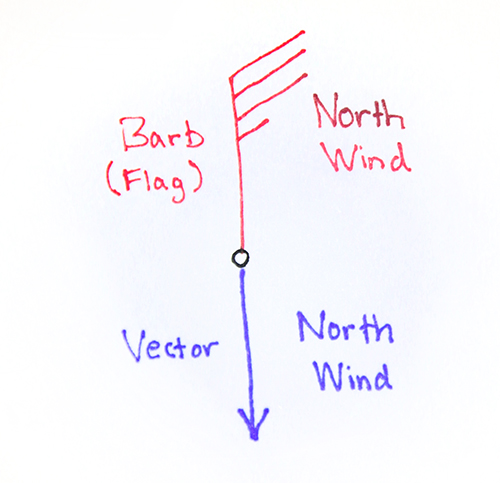 “Also remember that by convention, we speak of winds in terms of the direction they are coming from.”

“Unfortunately, once we start thinking of wind as a mathematical vector, we want to use the mathematical convention for the direction”

(Where wind to East, or from west has 0 degrees.)

"To convert from “meteorological direction” to “math direction”, use use this formula (in degrees):

In Flowx the data is referred to as “Wind Vectors”.
Hence (at least according to the definition linked above):

So i see two problems:

This is the definition how wind direction is given since centuries and proofed useful, not only but particularly for sailors. We’re always in need to know from where wind is coming

to be honest I never knew the icom looked like that

just thought it was the symbol they use for power

Aperently I was wrong about:

Flowx is not consistent with the definition of wind vectors. Flowx point like a barb, but call it a vector.

The icon is just so small on my screen that I can’t see that it is an arrow fointing at the center of the cirkle. It looks more like an arm on a clock, pointing out from the center.