As you can see in the attached screenshot, the HRRR, NAM and GFS models have not updated recently. Thank you for your consideration.

NOAA is having server problems which is slowing down my workers in processing the data. It’s unfortunately affecting other models too. I plan to lower the NOAA priority and add more workers. 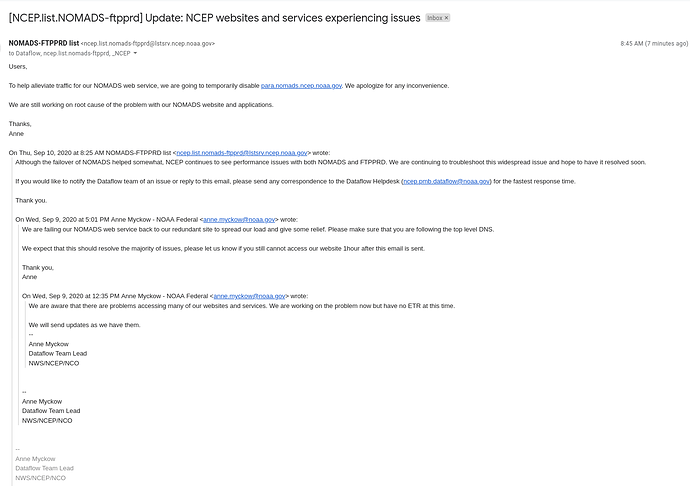 Oh geez. Thanks for checking, Duane! Hopefully they can get the problem fixed soon.

Since it is not readily obvious when you open the app that models may not be updated, I wonder if there is some way to notify the user at the app start of this situation? Maybe have the server and model status show as a splash screen when the app starts (while also keeping it under the Info menu), and have the text turn red if a model is more than 30 mins or an hour after the anticipated update time?

I personally would have no qualms with pressing the OK button on a splash screen when the app starts, as long as the maps are loading in the background.

As always, thanks for a great app and working so hard to make it one of the best out there!

I have considered this feature but it’s not that simple. I predict the update time based on when the source was last update + the update period. The delay can easily be 30 minutes or an hour for a variety of reasons. If there is a minor delay, obviously the update time will be later for the next one. Most of the time the user will not notice this delay.

Also a user in Europe will not want to be notified about a delay with USA data.

This delay is a major delay caused by a major network problem at NOAA. This is very rare - like once in 5-10 years. I have many auto-fixing mechanism and auto-emails when problems arise. This is so rare that there is no auto-fix. It just kept trying to process the NOAA data which delayed all other data.

So a notification is not a simple feature to implement well and it’s not a high priority feature since it will not be used often.

Also I wonder if I’ll get more support emails if I highlight delays. Some people love complaining about minor things.

I’m trying to get more workers up. It would be better for me to spend the time to build an automatic scaling system or the ability to quickly downgrade NOAA data source and bring up new workers. At the moment I’ve spent 1-2 hours trying to bring up one extra worker!

As you say, given how rare this kind of event is, I’m ok to not have any notice/check on how old the model data is as compared to how old it “should” be.

I think the better approach would be to add an app notification thing where I can push notifications to users. For example, I would send out a notice to all users that “NOAA servers are down affecting GFS, HRRR, …”

I have been meaning to do this so I can notify old app versions to upgrade.

We are still experiencing extreme disruptions to some of our NOMADS services. Within the last 30 minutes we attempted to restore the https service with some limited success. However, the GRIB Filter Service is still not functioning adequately to support the user requests. All services to FTPPRD have been stable for several hours now.

Support staff are continuing to work the problems, but at this time it is unknown when all services will be fully restored. We appreciate your patience during this impactful time.

Thanks for all your responses. I completely understand not wanting to do something that could cause MORE people to complain! There definitely isn’t an easy solution. I do like the idea of a push notification feature, as that is something that could be beneficial for a variety of things, not just something like the current NOAA data issue. You’ve got a great app, and I appreciate all you do to continue improving it! I’m happy to have been with Flowx almost from the beginning!

It’s 5 am where I live, and I see the models still have not updated. This is crazy, but what would you expect in 2020!

Good news, it looks like the data is starting to process. I’ll get GFS and HRRR done, then move on to NAM and NWW3.

My workers are just processing the data now. Hopefully we’ll be all back to normal in an hour or so.

Any updates on this? I’m still not seeing new data. Do we need to do anything on our end to get the latest data?

We’re all up to date now as of 2 hours ago. The disruption caused havoc on Flowx servers and it took a while for me to get them back up to date.

There might be some missing historic data but that will be fixed in a few days.